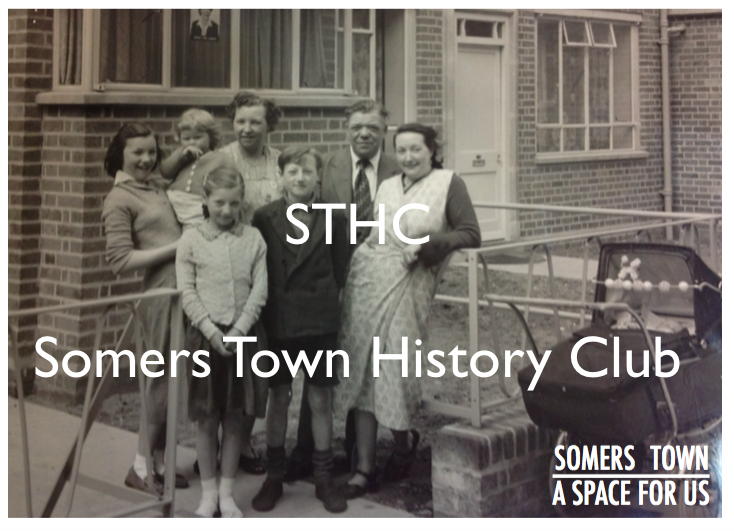 Over 20 of us gathered round Basil Jellicoe’s picture for old-school storytelling in a ‘Bring your photo and tell a story’, with Cllr Robinson opening the session Wednesday June 1st.

There were some surprises – who knew there’d been a Tory MP in the area? And that most homes had pianos from a local Italian supplier? Ghosts of busy shops and factories, which once populated the area, filled the room. Mimi Romilly and Doug recounted tales of Polygon buildings – the communal bathrooms, outside toilets.  George showed photos of parties about to set off on trips to the seaside, posed outside pubs long gone. 3 generations of the Carroll Family.

John and Joyce told us about the three generations in the photo of the Carroll family. and solved the mystery of the poster in the window – it was Lena Jeger, the Labour MP, “not someone you would cross!” said one local, Doll, who remembered her.

“Lena Jeger, the Labour MP, had been defeated in the general election by a smooth TV celebrity Tory Geoffrey Johnson-Smith” according to King’s Cross Voices, She held the seat from 1953 to 1959 and again in 1964, retaining it until 1979, when she became a life peer, notable for the part she played in the battle for equal pay! A good story is from her obituary:

“Canvassing a woman in a flat in a block in Camden Town, she launched into the great left-wing issue of the day – German re-armament and the threat that it posed to international peace and security.
When she paused for breadth, the constituent asked “Did you come up in the lift?” “Yes dear”, said Lena. “Stinks of piss doesn’t it?” said the woman. “Yes dear,” said Lena. “Can’t you stop ’em pissing in the lift?” asked the woman. “I don’t think I can,” said Lena. “Well,” said the woman, “if you can’t stop them pissing in our lift, how can you expect me to believe you can stop the German’s re-arming?””