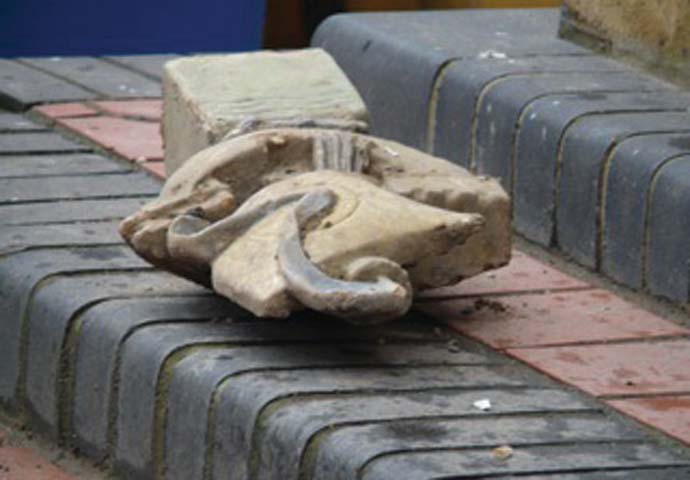 Much heated conversation about the missing ‘finials’ that decorated drying posts in St Pancras flats in Somers Town. A number had witnessed the destruction and taking of the finials over the years.

“People did used to steal them overnight sometimes, you would go out on the balcony and see another metal post instead of the figures, but to lose them all was outrageous. The housing association did say that they were going to be safely stored and restored after the renovations. “

Here’s a recent article, letters and an article from 2015.

Wanton Vandalism of Art for the people was a urgent plea to the Council to protect its heritage.

Father Pascal Worton of St Mary’s Church, responded in a letter, with support for a Somers Town museum.

And another letter by Steve McCarthy.There were over 100 – now gone!

Archivist and author of the story of the St Pancras housing, ‘Housing is not enough’, Malcolm Holmes was present at our Saturday’s event with exact recollection of the finials being stored in basement, and when they ‘disappeared’.

Tom Tremayne filmmaker touched on why – as did the article ‘Mystery as missing housing estate sculptures turn up in West End gallery’ – which the CNJ covered in 2015.

Yet finials are still turning up at auction, as this attests.

And this where it actually says, ‘stoneware washing-line post finial designed by Gilbert Bayes, made for the St Pancras Housing Association Flats, 1937, ‘

There was also a ship (below), a “Doulton Lambeth stoneware washing line post finial designed by Gilbert Bayes, made for the St Pancras Housing Association flats, 1937, glazed in shades of red, pink, blue, green and buff, unsigned, chips and repair to finial, 43cm. high.Interesting that the Provenance: is given as Private Collection.