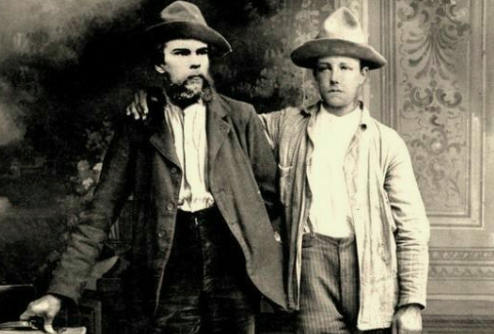 Asset Of Community Value means that a building is of sufficient value to the community that it should be preserved for the community’s use and for posterity as a cultural centre and it could be a home for a Somers Town museum.

If you are interested in supporting a campaign to save their house as an Asset Of Community Value, please add your names below.

More than wet fish: Camden’s connection to Rimbaud and Verlaine

Readers of the Camden New Journal may have become rather too familiar with the saga of the French poets, and their final stay in Camden Town. But who would have thought that the path of European literature would be so abruptly changed in 1873, by an assault in Great, now Royal, College Street using a wet fish bought at Inverness Street market?
On their visits to England, Rimbaud and Verlaine lived at various London addresses, together or alone, but this is the only one where they have lived together that survives. They had met and fallen in love in Paris in 1871: Paul Verlaine aged twenty-eight, a bourgeois Parisian married with an infant son, and Arthur Rimbaud, a precocious and iconoclastic young man from Charlesville in the Ardennes. From Paris they eloped to Belgium and thence to London, and first found a furnished room to rent in Howland Street, again in Camden, in July that year. Much of this street was demolished in the 1930s to make way for a telephone exchange, and is now the site of the Telecom Tower.
Soon after their arrival, they joined the growing émigré community of political refugees, Communards, religious dissenters and back street hustlers who enjoyed a convivial life on gin, absinthe, hashish and opium in the taverns and cafés of Soho and Marylebone. It is also likely that they heard Karl Marx, who was interested in the political tensions in France, when he spoke in the upstairs meeting-room at the Hibernia Store in Old Compton Street. They were “delighted and astonished” by the metropolis, where were also Huguenots and even Carlists from Spain, cosmopolitan and truly ‘bohemian’.Rimbaud went back to France for a brief visit, but returned to Howland Street where Verlaine was still living. Like Marx, they spent days in the warmth of the Reading Room of the British Museum. As an adventure, they rode the new underground, together explored the suburbs, found Hampstead Heath “admirable” and even liked London’s smog.In 1873 they came to Camden Town, a district into which many inhabitants, usually Irish, had been displaced by the new railway stations at Euston, St. Pancras and King’s Cross. “It’s very lively,” wrote Rimbaud, “You’d think you were in Brussels.” From its rear windows, 8 Great College Street overlooked the smoky traffic of locomotives steaming into St Pancras. Their landlady was Mrs. Alexandra Smith, whose husband was a ‘Corporal of the Horse’ in the Royal Horse Guards billeted nearby at Regent’s Park Barracks. Almost next door in Great College Street was the Veterinary College, founded by a Frenchman, Benoit Vial de St. Bel, just after the 1789 French Revolution. In its paddock and stables, sick or injured animals of the Horse Guards recovered.In order to earn some money they advertised French lessons: “Leçons de Français, en français – perfection, finesses – par deux Gentlemen Parisiens – Verlaine, 8, Great College Street, Camden Town.” In their front room, possibly on the second floor, they also indulged in private, sadomasochistic power games, sometimes involving knives with their forearms wrapped in towels, which reflected the tensions of their homosexual relationship. At times these conflicts became nasty and violent.But it was also here that some of their greatest poetry was written, including Rimbaud’s masterpiece Les Illuminations. Most of Rimbaud’s challenging Une Saison en Enfer (A Season in Hell) was also written in London by this precocious eighteen year old. They directly influenced Mallarmé, and from this developed Surrealism and Modernism, in art, music and and architecture as well as literature. Their poetry has since inspired music and musicians, from Gabriel Fauré to Bob Dylan.
One day towards the end of July 1873 Verlaine returned to these lodgings from Inverness Street, with a wet fish in one hand and a bottle of olive oil in the other. From an open window, Rimbaud noticed his approach and bellowed an unprintable insult. When he entered their room, Verlaine retaliated violently: he swiped his partner across the face with the fish, and then stormed away from the commotion they had created to St. Katherine’s Dock. Here he caught the next boat, which was about to embark for Antwerp. Rimbaud chased after him, and from the quayside he begged Verlaine to turn back.Having received a telegraph that gave his address at the Hotel Liège in Brussels, Rimbaud pawned Verlaine’s clothes and followed him. Threatening suicide, Verlaine had acquired a pistol. When Rimbaud arrived at the room where he was staying, Verlaine aimed the pistol and pulled the trigger. The first bullet wounded Rimbaud’s wrist. The action eventually came to court, with Verlaine sentenced to prison. After this brief, dramatic, period in London and Brussels, Rimbaud is believed to have written very little more verse.Instead he found a new life overseas, particularly along the Red Sea coast and in Abyssinia, where he became an entrepreneur, some say “smuggler”, in arms, skins and other materials. His career as a brilliant, influential poet had ended at the age of 19. But he is not forgotten and still in print. After his release Verlaine returning to writing. Despite his fall into alcoholism and drugs, he was recognised enough by his peers to be elected ‘Prince of Poets’ in 1894. His poetry inspired many composers of his era and after.
Rimbaud and Verlaine are recognised in France and worldwide as major figures in literature. There is now a controversial move to recognise them “properly”, by removing their bodies from their local cemeteries and re-burying them in the great Pantheon in Paris.

If you’d like to help us save their last London home, 8 Royal College Street, the place where their relationship fell apart thanks to a wet fish, please support our campaign here by adding your names and addresses.   Thank you,

References: Bohemians in a Camden tradition?